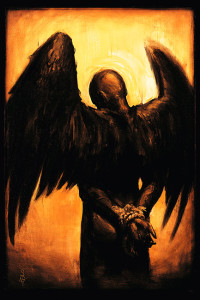 S. C. Versillee has been a practicing artist for over 20 years and has been juried into various national fine art exhibitions including the Catharine Lorillard Wolfe Art Club, the National Oil and Acrylic Painters Society’s “Best in America” and the Marietta/Cobb Museum of Art’s Metro Montage. Animals and human figures hold a prominent place in Versillee’s work, however, color, tone and context often function as secondary subjects in her paintings as well.

“As an artist, I’ve always been attracted to metaphor and symbolism. The primary influence in my latest works is a type of atmospheric phenomenon called “alpenglow”,  that rim of red-amber half-light somewhere between Earth’s sunrise and sunset. This ephemeral light is a powerful metaphor for me. It represents the brevity of life, the promise of renewal, the inevitability of regression, and the passive meeting of two powerful extremes in a moment of temporary truce. Anyone who has lived long enough has experienced euphoria and heartbreak, the peaks and valleys that etch out a life. I’ve reached a point of acquiescence about the nature of being alive that I feel is captured perfectly by ‘alpenglow’. The people and creatures I paint live in this light like curios preserved in amber, and it’s up to the viewer to decide if the sun is rising or setting for the subjects depicted.” 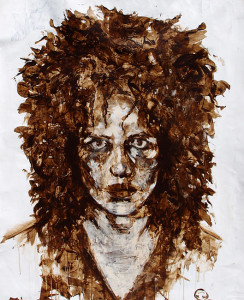 Ricardo has been a professional artist for more than a decade, his works tends to focus on macabre subjects, often interwoven with decaying textures and overtures of decomposition. All of his paintings have an overarching message of returning to the earth, and observing the “interconnectedness” of nature. His work has sold to private collectors across the country.

His pallet is cold and simple, he relies on heavy texture and stark subject matter to draw the eye.

“My work is about being born, dying and turning back into dirt and data.”